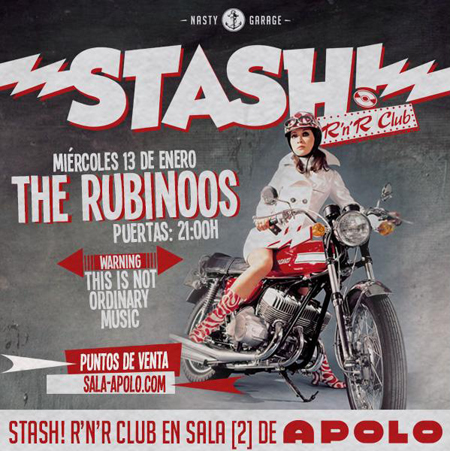 The band was founded in the70s. More than four decades later still with the force that has always characterized The Rubinoos , how do you can get such a long career in the world music ?

Did you ever see Monty Python’s Holy Grail? There is a scene where they are hauling away plague victims in a cart and you hear one saying “I’m not dead yet.” That’s us, “we’re not dead yet.”

I think the fact that we are all still really good friends is what has kept us together all these years. Our biggest problem is that we all live far apart, so when we get together to rehearse, we wind up talking more than practicing. But we force ourselves to play also, so it works out eventually!

I assume you have been the typical ups and downs of any musical band at this time, how has been overcome?

We have had plenty of adversity in our career and, just like anybody else who is as old as we are, we have had to deal with some serious challenges. But we have remained best friends and we love what we do. That is what has kept us together and let us overcome all kinds of crazy shit.

I think one thing is that we really have no expectations, except to have fun. We all say how lucky we are that we can go to places like Spain or Italy and have enough of an audience to make it worthwhile. It’s also really fun to record, so we’ll probably never stop until we are unable.

What is the formula to engage fans of different generations?

Above is one formula we use. The other is the fact that we don’t take ourselves too seriously and are not afraid to make fools of ourselves. I think all generations relate to that.

I don’t know of any formula, it’s not something we think about. We just do what we do. As far as the generations, I know that I listen to a lot of music that was recorded before I was born, so I think there are other people out there who don’t care if something is new or old, they just hear something they like, and that’s it!

What do you suppose to play in Spain for The Rubinoos?

Since we have a 3 LP vinyl set of our first 3 albums coming out we will be doing material from those records and some new stuff as well.

I’m not understanding the question....

How do you face your Spanish tour?

We can’t wait! We always love playing there. The clubs and audiences are fantastic!

Since The Rubinoos began in Berkeley, California, there have been many scenarios that ever walked, which one has been the best place you have played? Is there any place in the world where there is not yet done and you would love it?

Japan is also among my favorite places to play.

There was also one gig we did in a town called Reuver in The Netherlands in 1979 that was one of the most insane and fun.

I would love to play in Australia, more of Asia and South America before we call it quits.

Well, we’ve always wanted to play in Scandinavia, and on this next tour we will! My mom’s family was originally from Norway, so maybe I’ll run into some long distant cousins. ;-}  Besides Spain and Italy, playing in Japan has always been amazing.

From your experience, what do you think about the situation of contemporary music?

Honestly, I don’t pay much attention to contemporary music’s situation. I listen to mostly old stuff 1940s and 50s. As far as the business of music I notice that honing one’s social media skills is more important than practicing one’s instrument. That is just sad.

I think there are good aspects and bad aspects of the technology that is available. It’s good in the way that anyone can record at home, or easily in their rehearsal space. I guess you could say that it’s very democratizing. The downside is that it can make people lazy, thinking they will fix things later. In the old days of recording (say, the 1950s) you really needed to be rehearsed if you wanted to make a good recording. Studio time was expensive and fixing mistakes or even editing was difficult. On the other hand, the tools available now are fantastic if you want to create something that could never be played live. They can also be great for recording a live band if you have the self restraint and wisdom or discipline to do a lot of pre-production, like rehearsing! A good example is Auto Tune. I think it has made a lot of people lazy, thinking they don’t really need to learn to sing in tune. There is a pervasive “we’ll fix it later” attitude that I think is hurting some young (and not so young) artists....But they are just tools, great and useful if you use them the right way.

What do you think about the combination of Internet and music? Would you have harmed or benefited you in your career this combination?

I use to think it was a good thing and now I’m not so sure. There is just too much content to absorb and it is not curated in any decent way.

I guess the combination has helped The Rubinoos a bit but also hurt us. There was 100,000 downloads of one of our albums from a site in Russia and we didn’t get one cent for it. That money would have made touring Spain a lot easier!

Well, like the recording technology, I think it’s got its up and downs. It’s great that so much music is available, but sometimes it’s a little difficult to weed through it. I don’t know how it would have changed things for us if the internet had existed when we started out. Of course we use it just like everyone else now. Like doing this interview when we’re on two different continents!

What can we find in your last job, 45? Does this album has differences with your previous albums?

It was all recorded in Tommy’s basement for 1000 Old Turkish Lira.

The biggest difference is probably that we recorded it all in my basement studio. There’s that technology subject again! When we recorded our first album, it was on 16 track tape, and it was a big deal to even do a punch in. (That changed to 24 track tape by the time we did our second LP.) Now we record into the computer and it’s easy to do edits and things. Still, we try to really have things recorded quickly so we don’t get bogged down in what our friend Kevin Gilbert used to call “fly dentistry”! It’s so easy now to get bogged down in little details and lose sight of the big picture. Besides the methods of recording though, I think (I hope!) our songs and performances have become more “mature” over the years. We don’t write songs about how “your mom and dad are home and I have to sneak out the bedroom window” anymore. I think it would be a little creepy if we did!

For two of the founders of The Rubinoos, Tommy Dunbar and Jon Rubin, still ahead of the band, which job place more importance in his career : TheRubinoos (1977 ) or 45 (2015 )?

Well The Rubinoos 1977 was what started it all so I think it was the more important one for our career. I think both are great snapshots of a particular time in our career and both have really great songs.

Well, the first album was probably more important because it was the first. It was amazing just to have a record released in the stores! On the other hand the last album feels like kind of a landmark for us, 45 years! It’s very strange to turn around and realize we’ve been at it so long. It very much feels like, “Wow! Where did the time go?”

How has your audience changed after so many years of experience?

I think most of our audience now is the age of our original audience’s children.

Well, our original audience has grown older, right along with us.

;-}  But it’s kind of amazing to us to see people in the audience that weren’t even born when we released our first record. I don’t think we ever expected to see that!

Two of the most popular songs are The Rubinoos "I Think We're Alone Now " and "I Wanna Be your boyfriend " Do you consider that are the best songs of the band?

No, but I love them both.

I think they are 2 of the better ones we’ve done, but not necessarily the best. I think there are probably stronger and weaker songs on every album we do, but it’s all up to a matter of taste. I’m often surprised by the different opinions of reviewers and even friends who comment. If somebody likes anything we do, I’m happy about that!

What are your future plans?

Stay together longer than The Stones and keep touring Spain until we are invited to stay permanently.

We always think the upcoming tour might be our last, so we try to put everything we’ve got into it. I hope we will keep recording and playing for many years, but you never know what life holds in store for you. Best to make the most of the present!